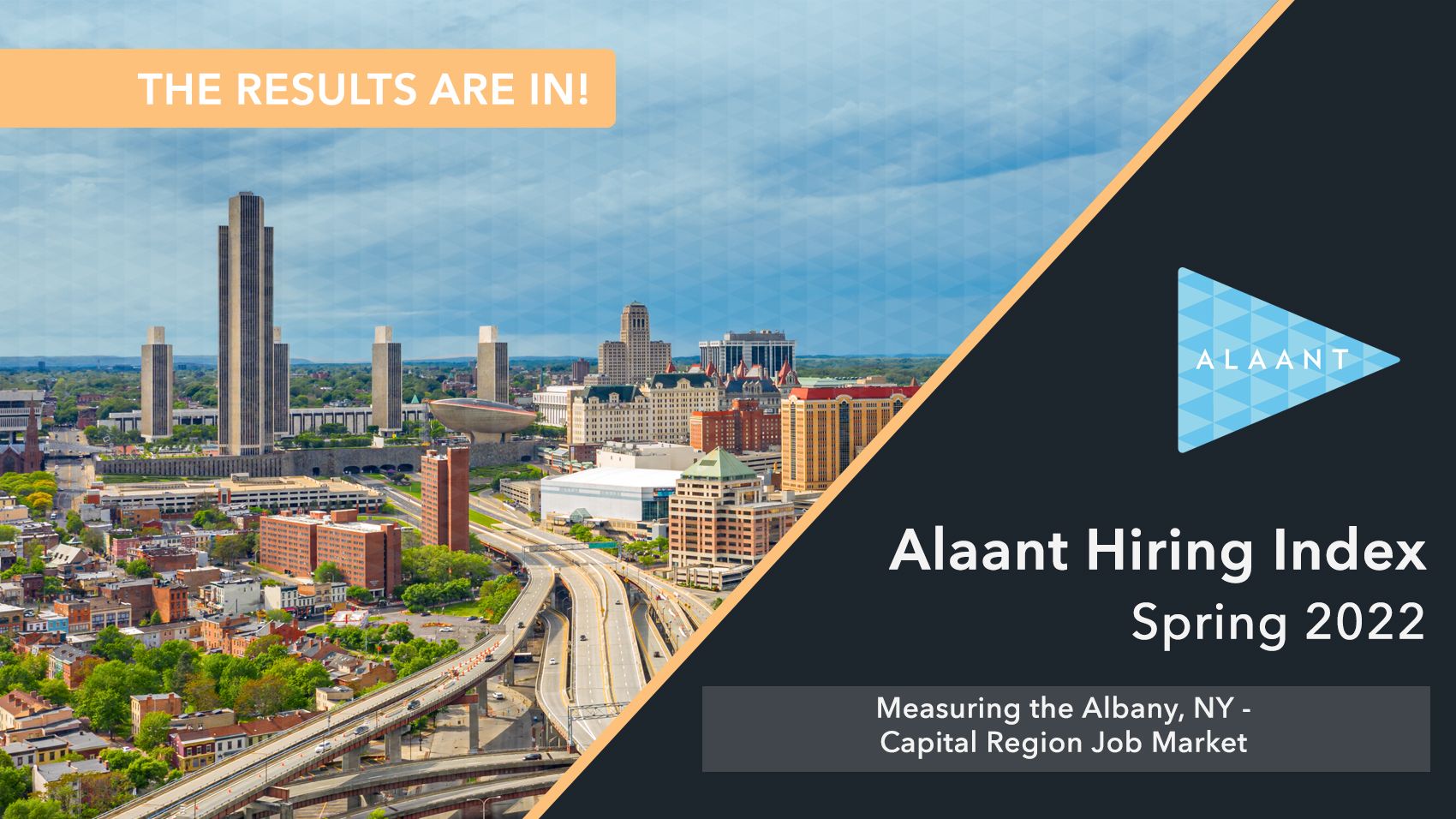 3 in 4 companies have increased hiring this year, and two-thirds will continue throughout 2022, but 87% say it’s challenging, the highest number since the survey was launched in 2015

Amid a labor shortage, employers continue to resist hiring remote employees, though productivity among remote and hybrid workers is not an issue

The Alaant Hiring Index is based on a survey of 82 hiring and human resource managers at Capital Region employers – including 55% from companies with 100 or fewer employees, and 45% with more than 100 employees – conducted between May 11 and June 10.

With 87% of employers characterizing hiring as either a significant challenge or challenging, that figure is the highest since the Index was launched in 2015. In addition, just 12% of employers expect the situation to improve over the next six months, the lowest level in more than two years. Those assessments came even as 82% of companies said they increased salaries to attract and retain employees, and 86% said they revamped their recruiting process.

“The Alaant Hiring Index reinforces what we’re telling employers every day: hiring will continue to be difficult for the foreseeable future, and addressing that challenge requires a new approach to recruiting,” said Miriam Dushane, Managing Partner of Alaant Workforce Solutions. “Raising salaries and expediting the hiring process is a great start, but employers need to think out of the box, from embracing remote and hybrid workers to offering flexibility and supporting work-life balance, to win the highly competitive battle for top talent.”

Once again, a labor shortage was the biggest challenge affecting employers’ ability to hire, cited by 45% of hiring and HR managers. That more than doubled other factors, including salary/wage demands (20%), a skills gap (13%), and the overall business climate (12%).

Though the competition for top professionals is fierce, most employers have resisted pursuing remote and hybrid employees to fill positions: only 42% say they’re actively considering remote workers. When asked if they’d be more open to remote employees if they lived locally, the number increased only slightly, to 46%. Those numbers come even though 92% of employers with most staff working either remote or hybrid schedules report productivity has remained the same or increased.

Amid the difficulties in recruiting, hiring continues to be a top priority of employers. Nearly three-quarters, 73%, have increased hiring this year, and nearly two-thirds, 65%, expect it to increase through the end of the year. And, 66% of employers are either optimistic or very optimistic about job growth for the rest of 2022, which is consistent with expectations at the start of the year.

In terms of the workplace, 41% of employers said their workforce is in the office 5 days a week; 46% are using a hybrid model; and 7% were fully remote.

And, asked which fields are showing the fastest-growing job opportunities, healthcare again topped the list at 37%, followed by IT at 25%, and engineering at 11%.

Alaant has helped more than 400 Capital Region companies attract, acquire, engage and retain over 4,000 elite employees over the past decade, offering innovative practice areas such as Talent Acquisition Partnerships and Employer Brand Strategy. Its exclusive Alaant Hiring Index, which has been measuring the Capital Region’s job market since 2015, is used by organizations to inform their recruiting strategy. The next index will be released in the fall.

Alaant Workforce Solutions has been recognized for five consecutive years (2017 through 2021) by Forbes as one of America's Best Recruiting Firms. In addition, Alaant has received the Best of Staffing® Client Award and Best of Staffing® Talent Award from ClearlyRated for the past 6 and 4 years, respectively. Alaant was also selected by HR Tech Outlook as one of the nation’s Top 10 Employer Branding Consulting/Services Companies for 2019, and by NYS-SHRM in 2020 as one of the Best Companies to Work for in New York.

The full survey results can be found here!

About Alaant Workforce Solutions. For nearly two decades, Alaant has delivered a full suite of consulting and recruitment services that enable employers to attract, hire and retain the best employees, strengthen business performance, and accelerate growth and profitability. Alaant’s team of employment experts uses innovative recruiting tools and solutions, creates effective Employer Brand Strategies, and provides exceptional RPO capabilities, always guided by a personal engagement with both candidates and employers, and a recognized commitment to integrity and excellence. To learn more, visit www.alaant.com.